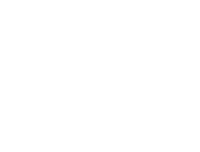 Elegant apartments for your holiday near Rome.

Casale della Falcognana di Sopra is doubtless one of the best places to stay in Rome because it is situated in a quiet location, but allows you to reach many interesting cities and tourist destinations within a few minutes' drive. Here is a short list of the surrounding cities you can visit from your holiday apartment near Rome. 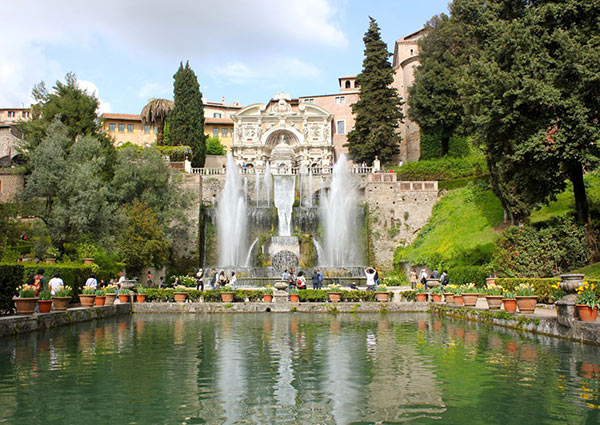 VILLA D’ESTE Villa d’Este, masterpiece of the Italian Garden, is included in the UNESCO world heritage list. With its impressive concentration of fountains, nymphs, grottoes, plays of water, and music, it constitutes a much-copied model for European gardens in the mannerist and baroque styles. The garden is generally considered within the larger –and altogether extraordinary-- context of Tivoli itself: its landscape, art and history which includes the important ruins of ancient villas such as the Villa Adriana, as well as a zone rich in caves and waterfalls displaying the unending battle between water and stone.

The imposing constructions and the series of terraces above terraces bring to mind the hanging gardens of Babylon, one of the wonders of the ancient world. The addition of water-- including an aqueduct tunneling beneath the city -- evokes the engineering skill of the Romans themselves.
VILLA ADRIANA Hadrian’s Villa near Tivoli (Rome) was built by Emperor Hadrian, starting from 117 A.D., as an imperial palace far away from the city of Rome. It is the most extensive ancient roman villa, covering an area of at least 80 hectares, more or less as Pompei. In 1999 Villa Hadriana was appointed one of the Human Heritage Monuments by UNESCO; as many other archaeological sites it is very famous, but still very little known in its essence, notwithstanding more than 500 years of excavations. A more scientific and modern approach to its study is a recent novelty. 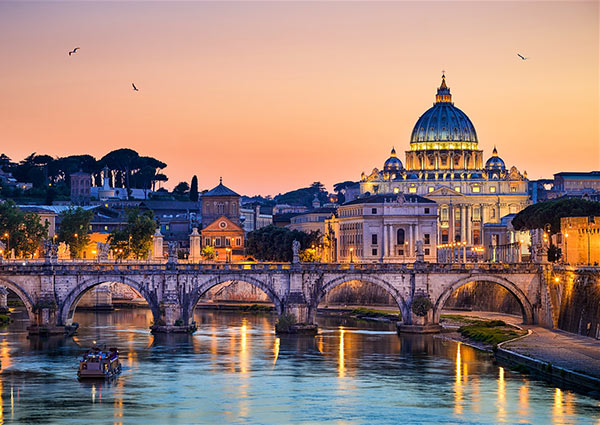 Throughout its history, over two thousand years, Rome has accumulated important art treasures and archaeological heritage which no one has in the rest of the world. Countless are the archaeological ruins, monumental buildings, churches, libraries, museums and cultural institutions, all to visit. 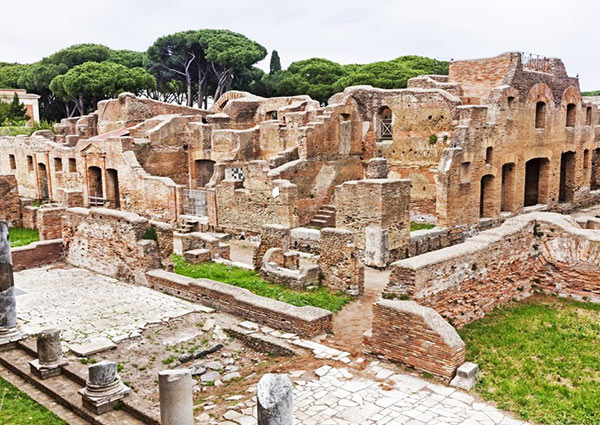 The ancient Roman city of Ostia was in antiquity situated at the mouth of the river Tiber, some 30 kilometres to the west of Rome. The shoreline moved seawards, due to silting, from the Middle Ages until the 19th century. Therefore Ostia is today still lying next to the Tiber, but at a distance of some three kilometers from the beach. Ostia is Latin for "mouth", the mouth of the Tiber. The river was used as harbour, but in the Imperial period two harbour basins were added to the north, near Leonardo da Vinci airport. The harbour district was called Portus, Latin for "harbour". 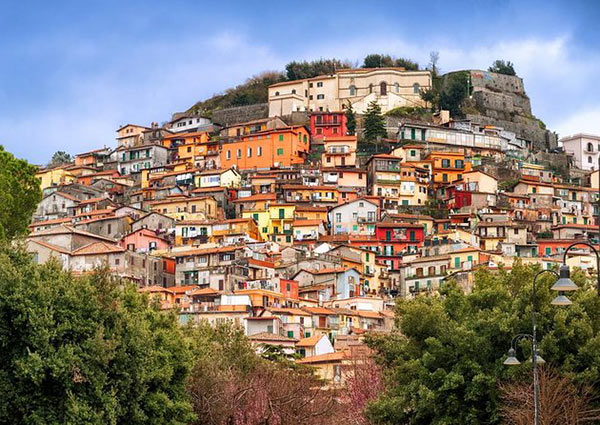 The name of the town derives from the rural huts made with tree branches (It. frasca) built by the inhabitants of Tuscolo, when their town was destroyed by the Romans in 1191. The small hamlet became a rich town in the second half of the XVIth century when the Altemps, soon followed by other Roman families selected this location to build their villas. In 1620 there were already 14 villas belonging to the richest families who spent their villeggiatura (holidays) in Frascati. 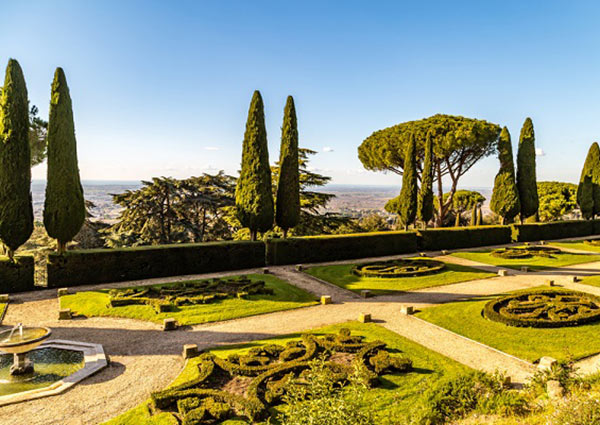 Castel Gandolfo is situated 25 km south of Rome and faces the vulcanic homonymous Lake. Since 1597 this has been the Pope's summer residence and the gardens of the papal palace contain the ruins of Domiziano's roman villa. In the small town there is a beautiful square with the San Tommaso of Villanova Church and a fountain, both designed by Bernini. 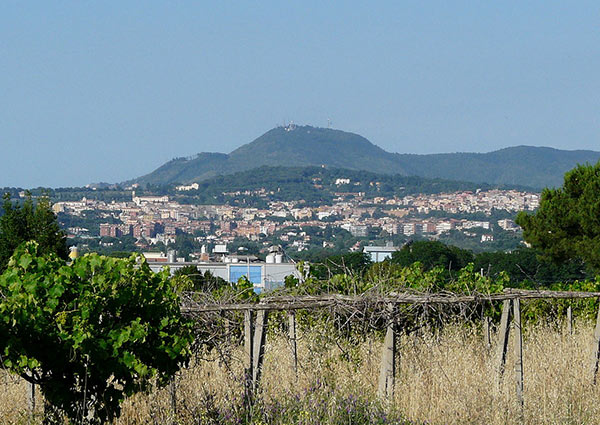 Albano Laziale is a beautiful City situated 25 Km in the hills southeast of Rome. Near there are two little lakes called Albano and Nemi. the beach is very near, only 20 Km. The Alban hills were a place sacred to the people of Latium. Old roman roads, temples, villas, and theatres are still preserved there. Because of their coolness in summer and the absence of malaria, the hills for centuries have been a favourite summer resort of old Romans people. The vineyards produce the popular wines knwn as "Castelli Romani", "Marino Gotto d'Oro", "Frascati", "Fontana di Papa". 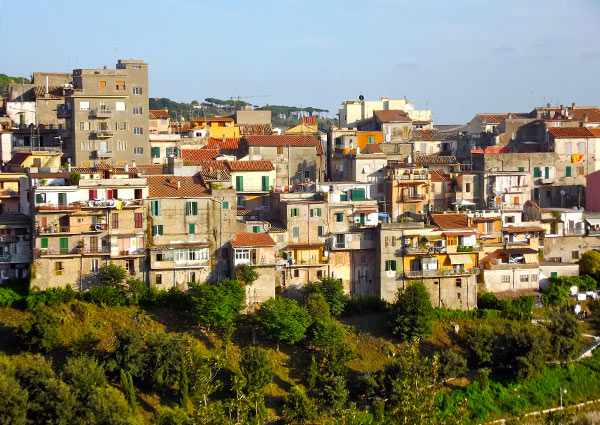 Ariccia boasts very ancient origins. As in all Latin cities, the first inhabitants of these places had to fight to maintain their independence. Ariccia became one of the most important Roman communities because of its geographical position between two volcanic lakes, Albano Lake and Nemi Lake. The most important monuments of Ariccia are: the Church of the Assumption, the Martorelli Inn, the Monumental Bridge, the Sanctuary of Galloro and the archaeological remains.